Good to see Adolfo's melon in the paper today. He's at the SOPA awards to represent the art department and I'm sure he did a fine job. He texted me saying "I'm looks Peter Sellers in 'The Party.'" Class. 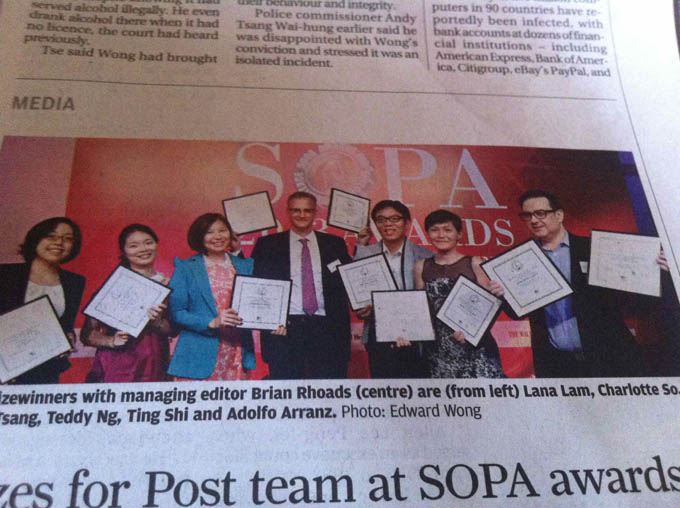 Of course the article got it wrong saying Simon Scarr only won an Award of Excellence for his Wiring the City graphic. He also won Honorable Mention for his Arteries of the City.

Harry Harrison won Honorable Mention for Editorial Cartoon http://wp.sopawards.com/wp-content/uploads/2013/05/661-South-China-Morning-Post-The-Handover.pdf - (mind blowing!) and we didn't win anything for illustration because they don't have an illustration section!

If you're a journalist you have 11 opportunities to win a gong at SOPA, photography: 2, graphics: 1, multi-media: 1, design you also have one chance - but only if you work on a magazine - and illustration you don't get any opportunity at all because although it's quite definitely the most difficult of the disciplines, we're also quite definitely at the bottom of the food chain. Overlooked, forgotten, left in a dark corner, occasionally spat on until after design and photography have struggled with a page and unable to find a solution, it lands on our desk and, with minimum turnaround time, we crank out a page holding illustration. Don't tell anyone but some of us even get paid!

The article also says that the China desk was the big winner but if you look at it another way, and get the information right, the big winner was Simon since he won 100% of the graphic awards. Well done Simon ... I had no doubt!